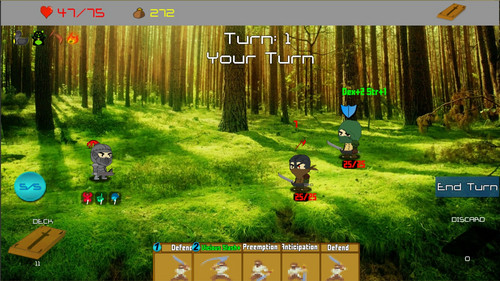 So Trinkets are pretty much this games version of artifacts they work more or less the same.  This was a scary bit of development because I kept getting out of memory exceptions but it turns out I had a loop pointing to itself because my params in one of the new methods was named similar to a variable :| was very scary thought I broke the game.

That and a thunder storm struck and shut off my PC while I was working on this update! Luckily though i had recently started using source control aka Github and it more or less had all my changes there! After the 2-3 hour black out.

In the screenshot for this post we have four Trinkets from left to right they are called: Iron Duck, Strange Cat Idol, Rusted Scythe and Ember they all do something as well to affect game-play.

Anyway I'll be putting this live soon I just want to make more Trinkets and give the players more opportunities to get them.

Edit: Not sure how to put the proper screen shot here :|